This book is well written and easily read. It contains within its pages, an authentic account of the hippie movement and would appeal to anyone who has lived during the late sixties and early seventies .This book also has historical value, people born later could learn about the way people perceived, thought and reasoned at that time.

I recommend this book warmly.

[Editor's note: This is an excerpt from a review by Bani Sodermark, October, 2019. The complete review is available on Book Pleasures at this LINK.]

I can't put all the good stuff from this book in this review because there are so many. Once you start it, it will be hard to put down. Steve Reifman, helped write this book because he was a "wanderer" just like Woodstock in this story so, he can relate his adventures to Mr. Burke.
"Wanderer", is a great book that teaches you about the beautiful demographic parts of this big, awesome world. You will picture the amazing landmarks and sites in your mind as the author describes them. You will find yourself back in the 1969 and the early 70's as you read every page. And if you weren't born during this time, you will learn a lot from this story. I love this book and I know you will as well.

[Editor's note: This is an excerpt from a review by Annette Anderson (mimilovesall8). The full review is available at Mimi Loves All 8.]

F. T. Burke and Steve Reifman, authors of Wanderer – The Ultimate Hippy Trail Journey, who have some incredible stories to share. Based on Reifman’s (aka “Woodstock”) year-long journey to ‘find himself’ – Wanderer tells the enthralling story of a young man who crosses the Atlantic with no itinerary and not much money, to do what other hippies did in the day—wander the world and search for his soul! Living life by a compass not a clock, because to travel is to live.

Wanderer: The Ultimate Hippy Trail Journey (Purple Whale, 464 pp. $19.95, paper; $9.99, Kindle) is a novel “inspired by true adventures,” as F.T. Burke puts it. Basically, Steve Reifman lived the story while Burke used his writing skills to put it down on paper.

The words “Vietnam War” are on the back cover. On page twelve we read, “Screw going to Vietnam!” Those are about the only mentions of the war, though, in a novel that begins in the Vietnam War summer of 1969 and frequently includes references to music and books of the era.

The title character is Steve, also known as “The Wanderer” because of the sense of wanderlust he frequently expresses. Before long, he’ll also be known as “Woodstock” because he was there.

He decides to hit the road and go backpacking through Europe and parts of Asia over what is known as the “overland hippie trail.” His father is deceased and I’m never quite sure how much The Wanderer is searching for his father’s spirit or trying to prove himself to him in some way, though that’s never suggested.

And, so he goes off to Luxembourg, Belgium, and Amsterdam. He stays in student hostels, “soaking up culture,” and interacting with natives and fellow travelers. Then to England, France, and Spain, where he dabbles in drugs , has run-ins with local law enforcement, and is shunned by most females. I couldn’t help but think Steve didn’t need to go to another continent to strike out, take drugs, and get rousted by the cops.

Things get a little more exciting after Steve lands in Morocco and then comes under rocket fire on the border between Jordan and Israel. I noted that as he moves closer to the East his thinking becomes more mystical. He can sometimes feel spiritual vibrations of places he’s in. Once he’s mistaken for a “saint.”

[Editor's note: This is an excerpt from a review by Bill McLoud in VVA Books In Review II. Read more ...]

I received a complimentary copy.

The book is long and takes a lot of time to get through, but you do not mind because it is an adventure the whole way. You feel like your involved in the moments and can laugh or take from each setting. It is more for adults and may have thicker moments of outright passion that some may not really get into. Basically it is not for the shy and is super out there in a not so mild way.

An Enjoyable Journey to a place in time! I really enjoyed learning more about this era and the various stops. It's not the type of book I'd normally pickup, but I'm glad that I did.

"It’s a story that includes plane, train, bus, car, and acid trips; hookahs, hook-ups, and hookers; backpacking, cheap hotels, mind-blowing drugs and scenery, and occasional reflections upon the oneness of God, and the possible meaning of life."

Donald H. Harrison is editor of San Diego Jewish World. He may be contacted via donald.harrison@sdjewishworld.com

This story feels like I'm peeking over the shoulder of my friends from that odd time when I was a 20-year-old and equally lost. At that time, I made the safe choice - get a minimum-wage job, go to night school, rent an apartment. But some friends chose adventure - they moved around, traipsing across unfamiliar places meeting exotic people.

WANDERER took me on 'The Road Not Taken' that these friends travelled and it was just a delightful adventure. These are places I've never visited, people I've never met, food I've never eaten - I hadn't realized until I read WANDERER that I've been jealous of my friends who had chosen adventure over taking the well-trodden path of job-home-bills.

This is what a story is supposed to do. A story works when it transports you to places you've never been. WANDERER works beautifully!

I loved the book. I felt like I was traveling right along with the group. It was very descriptive. A great read! 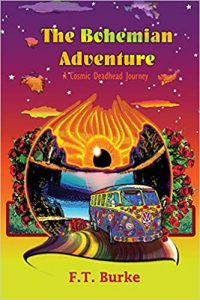