The Bohemian Adventure:
A Voyage to Free Consciousness

The journey to free consciousness comes to each person differently. Ted never expected to find his journey to the sound of drums and spiritual dancing in the moonlight.  He escaped to the wilderness to find himself and, to his surprise and delight, found the kin-souls and consciousness that comes with a tribal family. 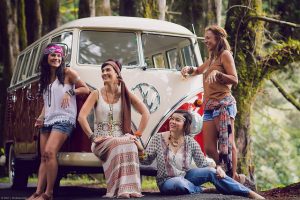 Nature holds its own sort of magic. Ted finds the serenity of it. But the loneliness lingers until 3 o’clock in the morning when he finds himself in a trance. The tribal chants enchant him and the freedom he observes is unmatched. As he awakens, the slit of his tent serves as his cocoon, his safe-place, until Jeff breaks the silence and introduces himself, his VW, and his tribal family of deadheads.

Jeff is only the beginning of Ted’s arrival into the freedom of consciousness. The happy faces and tie-dyed shirts spark his curiosity until the chorus of music and trance-dancing starts back up. Ted’s view is full, his safe-place of the tent is long forgotten as his mind wanders and connects to the banjos and the beats of hearts and drums alike.

The transfixion is broken through the transition of Ted meeting his new tribe. Grateful Dead followers – Deadheads – who live freely and love without hindrance or hesitation. Ted’s mind wanders into the realization:

Ted learns that peace is a choice. By freeing his consciousness and allowing it to float in thought,  he realizes the status quo is a choice he made. He now makes the choice to love unconditionally and allow the smallest things in nature to transfix his mind rather than the worries of the life he left behind.