Why does The Bohemian Adventure begin and end in the Woods?

Ted Senario lives simply, in nature, as the story unfolds. Ted’s experience is inspired by Henry David Thoreau’s Walden experience, a timeless experience that is repeated throughout the ages. By immersing himself in the woods, Ted – the principal character of The Bohemian Adventure – seeks a greater, clearer understanding of his self. He is nurturing soul inspirations that, he expects, will lead to a new life purpose.

I’ve been to Walden Woods. I’ve stood at the site of Thoreau’s cabin. I’ve added Michigan rocks to the rock pile that commemorates Thoreau. I’ve read the sign that marks the site, bearing the words of the great transcendentalist thinker: 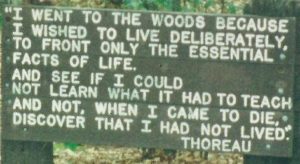 This was a driving factor for me as I created the story that became The Bohemian Adventure. Ted Senario is on a mission of self discovery throughout the novel. Circumstances in his life – a failed marriage, a failed business, a failed career – have driven him to the woods where he learns to understand nature and himself, at a root level. Ted sets out on a voyage to free his consciousness, within and without—from the inward revelations of his soul to the outward experiences of enlightenment in his journey.

You can achieve personal transcendence through your own personal, labored efforts.

Thoreau and his companion, Ralph Waldo Emerson, together exemplified the theory and application for promoting the search for the higher self through nature. They are the Transcendentalists, founders of an American movement whose roots reach back to ancient times and stretch from Europe to India onto the Orient. Transcendentalists hold that a common thread connects all individuals and cultures. The transcendental challenge is to connect with the spark of the divine—to liberate one’s self—awakening the dormant genius within. Thoreau’s Walden experiment set out to prove the point. The message is universal and applies to all ages.

In The Bohemian Adventure, Ted Senario explores his damaged soul while communing in the rawness of nature, following in the footsteps of his literary philosopher writer heroes. Ted’s individual struggle for self-liberty is profound and deep. New channels of thought and experience pave the way for his ensuing journey.

The Deadheads and the Transcendentalists

What a strange mix! You must be thinking ‘What does any Deadhead have to do with transcendentalist thought? How can mid-19th century literature have anything to do with 21st century bohemian activities?’

As a writer, as the author, my key objective is to use my platform to tell an engrossing story without being preachy or boring, yet bring the lessons of the Transcendentalists through. The Deadhead crowds provide a rich setting for extrapolating, through the characters, many of the tenets of the transcendentalist philosophy espoused by Thoreau, Emerson, and the others in the Transcendentalist community – Margaret Fuller, Louisa May Alcott, and Walt Whitman, and others.

But I can’t get bogged down in what appears to be the irrelevant literature of the past. Instead, these great 19th century minds help to move the story line along to wonderful effect. The Deadhead characters do the rest.

The Great Chain of Being

How do you approach self discovery in your own life? Are you the arbiter of your destiny, the master of your fate?

In my novel, The Bohemian Adventure, I tell the tale of a man who dives deep within his own transcendental nature to discover his true essence of being. In that spiritual quest or process, a new life purpose is born.

Read the yarn and know it first-hand. Become a link in the great chain of being. Then you will have become a transcendentalist Deadhead.